Medellin on the road to becoming a knowledge economy For many years, Johannes Kepler, guided by his deepest inner beliefs, wanted to demonstrate that the orbits of the planets were circular and circumscribed to spheres within a polyhedron, in accordance with an ideal image of the perfection of the cosmos. He had the most extensive and accurate astronomical measurements of his time, but his model did not fit them.

With great nobility and courage, he surrendered to the evidence and accepted that, in their orbits, the planets fulfilled a most "modest" figure, an ellipse, so that their deepest convictions would be broken. His contribution was invaluable.

We often hear that to manage something, it is necessary to be able to measure it, but more so than measuring it, we need to seriously consider what the measurement tells us, since it indicates where we are and where we should advance.

This document gives a description of what happens to a city in terms of socioeconomic transformation sustained by science, technology and innovation, contrasting the results with evidence from different independent sources.

Medellin with the Best Economic Performance

In a large study entitled "Global Metro Monitor,"1 conducted by the US research center Brookings2 in Washington, we analyzed 300 cities with the best economic performance in the world.

The classification made in this analysis is based on a combination of two variables: per capita GDP growth and employment generation, with a final result divided into 5 groups of 60 cities. The results published in 2015 show Medellin as the city with the best performance in Latin America. Our city is ranked 46th in the highest group. Of the remaining Latin American cities considered in the study, only Lima, Peru, is in that first group, two places after Medellin, in the 48th position.

Of the 300 cities evaluated, only 96 are located in developing countries, which further enhances the good result obtained by Medellin. 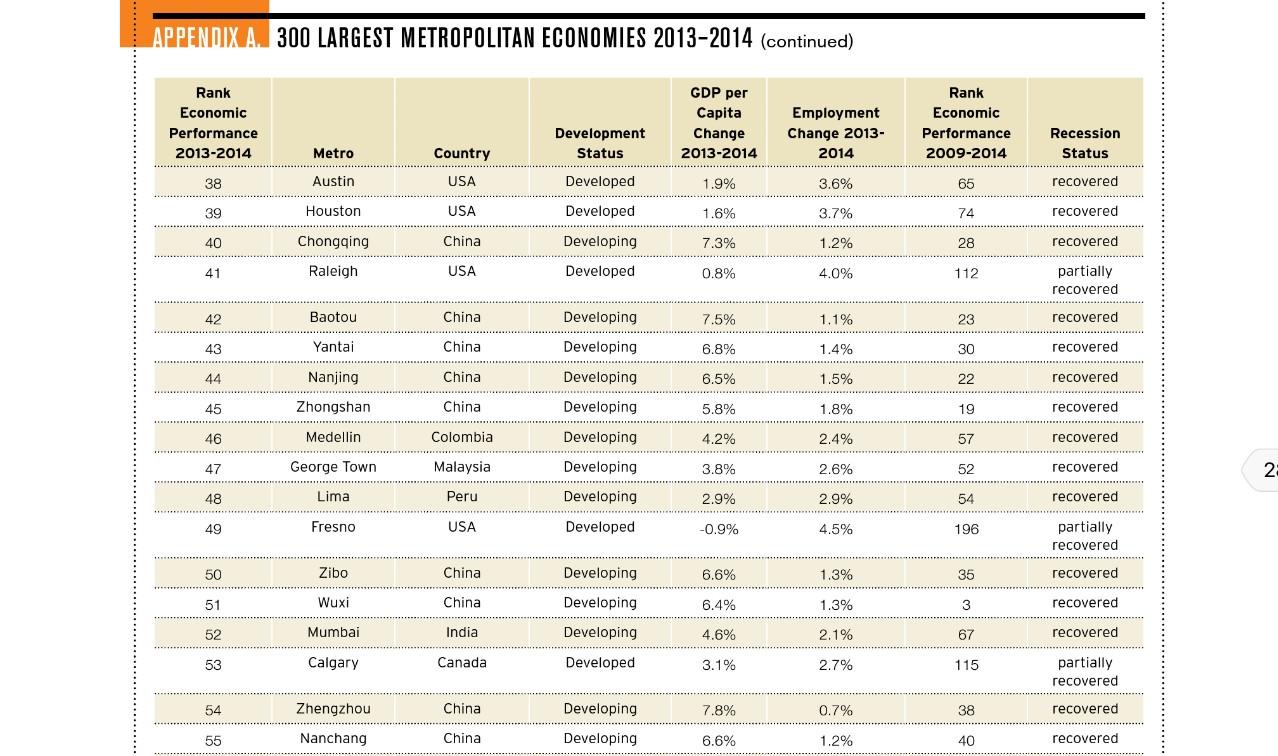 Note: The figures in this report come from the national statistical department of each country, such as DANE in the case of Colombia. Information on American cities is from the agency Moody's. For the other cities in the world, data from the Oxford Institute are used.

Another important aspect revealed by this study is that most of these cities grow on average more than their countries. This confirms the fact that we have stated since the creation of Ruta n, that the present and future belongs more to cities than to countries.

The per Capita GDP of Medellin

In 2015, the Medellin Department of Planning revealed official data on this economic variable up until 20133. These numbers, projected with Medellin's historical growth rates in relation to Colombia’s growth in recent years,4 led us to ensure that Medellin's GDP in Current Pesos, expressed in internationally comparable dollars (PPP rate5), was approximately 19,625 US Dollars6 per capita in 20157 (Medellin, not including its metropolitan area8).

Here you can see how the numbers have changed in recent years:

Outcomes of New Business ST+i in the City.

As a direct action of Ruta n in the last 4 years, 153 new companies from 23 countries have been located in the Ruta n complex in the Innovation District. These companies have generated more than 2,500 new jobs in innovation activities in Medellin, in areas such as energy, health, specialized services, ICT, among others. This video explains very well what is really happening in Medellin: https://www.youtube.com/watch?v=87kR7MLlxe8

Today, the network of intelligent capital developed by Ruta n multiplies the annual investments in start-ups and innovation projects by more than 10, compared to what existed 5 years ago. Details on this network and its evolution can be seen at inversometro.org. Furthermore, The Global Market Access Network operates with 50+ active members supporting the internationalization of innovative businesses. 5 years ago, Medellin had no venture capital scheme and today it is the leading city in that segment with a value of 90 Dollars PPP per capita.10

In the city there is also a Network of Business Development Centers, CDNs, which are already replicating their growth model with private enterprises, a true demonstration of a smart specialization strategy.

In Endeavor's words: “…tech entrepreneurs in Medellin have relationships with other tech founders and companies via mentorship, angel investment, employee spinouts or serial entrepreneurship. These connections have created a cycle of growth in Medellin, and will ensure sustainable growth of the ecosystem if carried forward into the future.”11

All of the mechanisms described above already have sustainable financing systems for innovation, such as Ruta N Capital: RNK, which is based on a breakthrough: “Innovative Scoring,” a new city evaluation system designed to reduce the uncertainty of innovation projects (Innometrics® from Ruta N).

Annual Survey of Innovation in Medellin

The design and implementation of this instrument took several years and required the integration of several regional (CMMA13 and Ruta n) and national (OCyT,14 DANE15) organizations, as well an entity that would provide broad independence, solidity and support for this annual measurement, such as the CNC: National Consulting Center.16

The survey was designed to evaluate the companies that support approximately 85% of the GDP of Medellin and the Aburra Valley (18,400).17 5,000 of those companies were chosen randomly to complete the questionnaire. The surveys were conducted in person by a trained professional in innovation, to avoid any confusion on what was being asked in the survey.

The survey was designed keeping in mind the measurements taken by the OCyT, the EDIT survey scopes of DANE for Manufacturing and Services. It also uses the OSLO manual definitions.18

The results are impressive and mark the corporations’ activity path in the coming years.

Innovation Node of the World

Attracting high-level talent and smart capital from the world to Medellin is essential in the goals we have set for ourselves, even more so if that talent and money is powerfully connected to other global ecosystems of innovation. The most reputed evaluation of innovative cities in the world is by the firm 2ThinkNow.21

In its last evaluation in 2015 for 445 cities in the world, our city was the one with the most advances: it moved up 100 places with regards to its ranking in 2014. Medellin was first categorized as a World of Innovation NODE and is now the third Latin American city on that list, behind Sao Pablo and Rio de Janeiro.

Preliminary evaluations indicate that Medellin could be ranked as a Global Innovation HUB for the first time in 2017.

For a city that spent many years being an economic center focused on industrial work, which does not have direct natural resources, it has gotten bad press for almost 30 years. It is not the capital of the country, it is not by the sea or a large river and it is physically and logistically isolated from the rest of the country and the world. Its per capita income level clearly indicates that the transformation that is taking place towards a knowledge economy is solid and is already under way, and it is responsible for much of the current level of development in the city.

In that sense, Brookings' external evaluation, city innovation survey data, Endeavor’s study remarks, 2ThinkNow assessments and the GDP per capita all coincide with each other in their results and proportions, despite the data coming from other sources.

5 Purchasing Power Parity: PPP from data of the World Bank.

6 Given the public and territorial division of the country, these data are NOT systematically produced by DANE, as it is for departments and for Bogotá as a Special District. This is an unfortunate fact that masks the realities of the city, the metropolitan area and the regions, which prevents appropriate decisions from their public policies. This is even more critical if we accept that the future is based more on cities than departments or countries.
7 It uses population values supplied by the DANE for Medellin, not including its metropolitan area, for those years.

10 Israel is the world leader in this aspect with around 450 dollars per capita.

19 Each innovative job generates 5 more "current" jobs in the economy, according to studies carried out on more than 10 million jobs in more than 300 cities in the world, led by Enrico Moretti: U California Berkeley and London School of Economics.

20 Science Technology and Innovation Activities, for its acronym in Spanish. 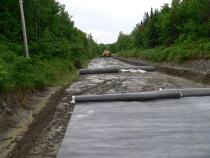